In search of Borneo’s wild orangutans

A river safari in Malaysian Borneo uncovers a treasure trove of exotic wild animals, as well as an intriguing history of one of South East Asia’s most varied and beguiling destinations. Sandakan is a jaunty, pleasant, very green and leafy little town, with a modern veneer yet steeped in history. It is also gateway to the richest concentration of wildlife left in all Borneo.

Situated on the northeastern seaboard of the Sulu Sea, in the northern province of Sabah, in Malaysian Borneo, the town was once capital of the privately owned British North Borneo Company and later was incorporated
as a British colony.

Sabah is often called ‘the land below the wind’, since it lies just south of the typhoon belt and outside the Pacific earthquake rim. South of this province lies Indonesian Borneo, Kalimantan; and to the west is the tiny independent kingdom of Brunei.

Boasting such valuables as pearls, timber, sea cucumbers, edible birds’ nests, rattan and camphor – the resource-rich Sabah was a magnet for adventurers and traders from many parts of the world, laying the foundation for the vast mixture of diverse peoples that now inhabit the province.

Chinese, Arab, Indian, Japanese, Philippine, Spanish, Dutch, German, Austrian, and English traders all in time called on its fine port, all seeking fortune and riches. At the height of the timber boom, Sandakan was noted for the substantial number of millionaires living there.

Before the 16th century, the Sabah area centred around the Kingdom of Brunei. In the 18 th century, it came under the suzerainty of the Sultan of Sulu, which at that time controlled the southern islands of what is today the Philippines. The sultanate was notorious for its slave trade, raiding nearly all of Borneo and much of Indonesia.

In 1878, Sabah was incorporated into a private British company called British North Borneo. Sandakan became its capital in 1883.

During World War II, Sabah was invaded by the Japanese and Sandakan captured in 1942. European and Chinese POWs (prisoners of war) were rounded up and held in detention camps in the area. In an attempt to dislodge the Japanese, Allied forces began bombing Sandakan in 1944; by the time the Japanese realised that the war had been lost, the town had been totally destroyed.

The British North Borneo Company could not afford to rebuild the city; hence Sabah became a British colony in 1946. Reconstruction of the ravaged town began almost immediately after the war. The Federation of Malaya gained independence from Britain in 1957; and North Borneo was incorporated into the Federation in 1963.

Today modern, multi-storied buildings running along streets laid in straight, grid-like fashion, jostle with faithfully reconstructed colonial edifices, churches, temples, mosques, markets and parks, and along the pier, traditional wooden houses on stilts where fishermen need only step onto a boat to earn their daily bread. From the pier, looking across the Sulu Sea, you appreciate the proximity of Philippine waters – a mere 30 kilometres away.

Site-seeing in downtown Sandakan unlocks some of the fascinating history of this far-flung corner of the world; and there is indeed plenty to see. But, you’ve come here for the wildlife, and you know that the best is yet to come.

A journey down the wide, muddy Kinabatangan River (Sabah’s longest, at 560 kilometres) leads you to the domains of a virtual Noah’s Ark of South East Asian wildlife: ten species of primates, Borneo Pygmy elephants, Salt water crocodiles, Clouded leopard, over 200 species of brilliantly hued birds - including all eight species of hornbills, and the biggest prize of them all – the endangered orangutan.

The Lower Kinabatangan Wildlife Sanctuary has an area of approximately 26 000 hectares, and is home to the highest density and diversity of wildlife in Malaysia. 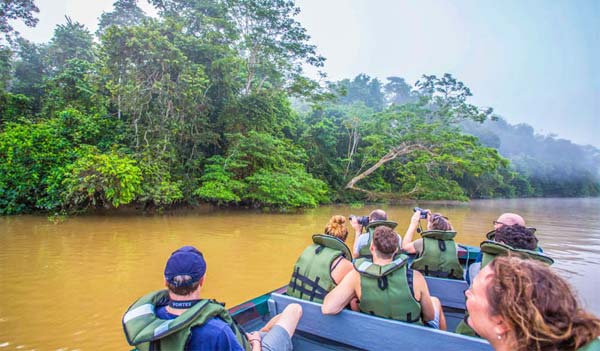 Coming from Botswana, where a safari means bumping along in a 4X4 vehicle over vast tracts of uninhabited wilderness, with a host of animals in largely intact ecosystems, I knew that this experience would be quite
different. 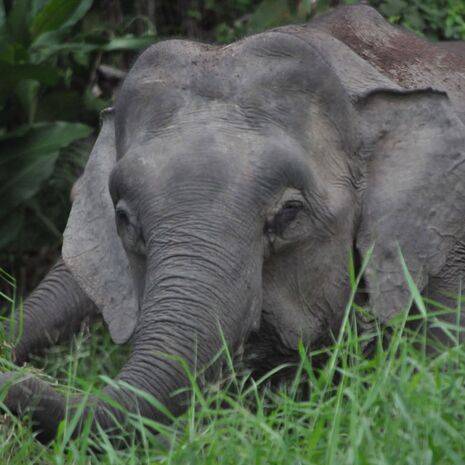 I had read how the rampant logging and palm oil industries, and expanding human habitation, were persistently pushing the wild animals into thin strips of rainforest straddling the river. This was clearly visible as our speed boat took off and began the two-and-one-half hour ride to our destination: a rainforest eco-lodge.

We passed villages, lodging comprised mainly of houses on stilts, small, adjoining gardens, washing blowing in the wind and children playing in the sand, then tracts of palm oil plantations, then patches of primary rainforest! It was a mish-mosh of different land uses in very close proximity, leaving me wondering how the wild animals coped.

Slightly disappointing at first, but then, as the wildlife viewing began, temporarily forgotten. Suddenly, the boatman brought our vessel to an abrupt stop, turned it around and slowly approached the shore. There, unbelievably, stood a small herd of wild Pygmy elephants! They looked like a real-life version of Walt Disney’s Dumbo, ears dominating their heads, bodies shorter and rounder than those of their cousins, the adults approaching the size of an adolescent African elephant.

I was looking at one of the last remaining populations of this sub-species of Asian elephant, with only 1 000 estimated left in the wild; and as they munched on thick tufts of tall grasses, their bodies shining in the sparkling sun, our boatman smiled and chuckled: “Not all tourists are this lucky.”

Giving us time to watch the diminutive pachyderms, the boatman then took off, but shortly thereafter stopped again, this time to see a huge Salt water crocodile sunning itself on the riverbank!

And then, a short distance away, a troupe of those comedians of the primate kingdom, the Proboscis monkeys. With its enormous, dangling nose, pot belly, reddish flat-top hairstyle and white markings making it look as if it is wearing shorts, this commonly seen primate cuts a preposterous figure in its jungle domain.

Good fortune ran through my three-day stay, with good game viewing on morning and evening boat excursions. Electric boats made it all the more enjoyable, albeit outings a bit too short for my liking. Pig-tailed and Long-
tailed macaque abounded, as did gibbons and various species of langurs. Bird-watching was astonishing, with one sighting of the amazing Rhinocerous hornbill and another of a Buffy fish owl during a night excursion.

I explored the lodge’s ‘boardwalk’, which had two elephant passes; and I felt overwhelmed with the size and density of the rainforest trees, as well as its stifling humidity, the uncountable bird calls continually reverberating through the forest canopy.

This all opened up a totally new chapter of natural history experience to me, the exhilaration indescribable.

But - still no orangutan.

There are two species of great apes in Asia: the Bornean orangutan (Malaysia, Indonesia and Brunei) and the Sumatran orangutan (Indonesia), found only in the rainforests of these two islands. Orangutan literally means ‘man of the wild’ or ‘jungle man’, an indication of local reverence for the ape.

Orangutans are the most arboreal of the great apes and spend most of their time in trees. Their physical characteristics include reddish-brown hair, large, round bellies and human-like faces and eyes. Dominant adult males have distinctive cheek pads and produce long calls that attract females and intimidate rivals. Younger males resemble adult females.

Orangutans are the most solitary of the great apes, with social bonds occurring primarily between mothers and their dependent offspring, who stay together for the first two years of the offspring’s life. Their diet is composed primarily of fruit, but they will also eat vegetation, bark, honey, insects and even bird eggs. They can live over 30 years in both the wild and captivity. Highly intelligent animals, orangutans use a variety of sophisticated tools and each night construct elaborate nests from branches and foliage in which to sleep. They have been extensively studied for their learning abilities. There may even be distinctive cultures within populations.

Fascinating information on the great ape, but where were they?

Finally, on the last day of my trip, I was rewarded. I had decided to rent a private boat with guide; and we took off in the enveloping mist of dawn in search of ‘the ginger apes’.

There are times when on safari, moving through wilderness areas, the experience becomes unexpectedly touched by magic. And such was my last morning at Kinabatangan.

Swirls of mist and fog fingered at our arms and legs; they and the impermeable vegetation obscured vision, and made the jungle feel invisible. Interminable creepers and vines slyly choked the thick bushes. Every manner of insect everywhere, giant mosquitos jabbing through our clothing. Ghostly trees soared to the heavens. A cacophony of bird and monkey calls broke out; yet in the thick foliage, they were heard but not seen.

My guide veered off the main river and onto a tributary. No villages, boats, people or tourists. We were alone in this mysterious, slightly intimidating world.

We moved silently, unobtrusively, in the electric boat, with the guide stopping to check here or there for the apes. We chatted in low tones, me milking him for information on the animals in his world, and he asking me
pointed questions about African wildlife, of which he already had a good working knowledge, through avidly watching Animal Planet and National Geographic.

And then, quite suddenly, the boat stopped. My guide tapped me on the shoulder, and silently pointed up. There perched between two tree branches was a female orangutan, and she had an infant!

Munching wild figs, she stared down at us, her face, eyes and expression startlingly, disarmingly, similar to those of humans. Her red hair stuck out in spikes from her head, her belly protruded, as if an overweight matron. She pulled her babe closer to her, and it started to suckle.

It seemed such a lonely existence, compared to those of other social primates, and so many other animal species – only she and her babe, facing the world together. She moved through the trees a bit, those long,
massive, powerful arms enabling her to swing through the branches with ease. But she didn’t go far. She stopped to tug at some more fruits, and to once again get a glimpse of the intruders.

Within minutes, she had decided to flee the scene; and I was left speechless, hankering for more.

With fewer than 55 000 Bornean orangutan left in the wild (though figures differ), this was a privilege to be savoured. But then, with shrinking wildlife populations everywhere, all over the planet, every encounter with wild animals now falls into this category.

Posted in TRAVEL AROUND THE WORLD.