There was only the silence – a silence so profound that you could almost hear it. That and the giants of the land at the waterhole right outside my chalet.

Can we ever tire of watching them?  Remarking on their movements, interactions, behaviour, and the sometimes astonishing similarities to us.

We are often surprised by their marked intelligence, family ties and structures, their emotionality and enormity of body and spirit that fill the silence of the wilderness, reverberating from the vast, empty pans that stretch for hundreds of miles around them.

I sit in the sharp, cold, early morning wind of the Botswana winter, watching the pachyderms, wondering if I will ever penetrate their secret world.  So near and yet so far away….

Scores of elephants partake of the muddy water in the small waterhole at Nxai Pan, part of the Makgadikgadi Pans complex, in northern Botswana, in southern Africa.

This morning there is a bachelor herd, led by an old bull whose experience teaches other males – young and old – where to find food and water during these dry, lean winter months. Later the water hole will be visited by breeding herds - led by a matriarch - whose young ones cavort and play, darting between their mothers’ and aunties’ massive, column-like legs, occasionally needing a gentle rebuke.

As the animals interact, their deep bonds become apparent, as does their intelligence – written on their faces and obvious in their actions. One could sit and watch them for hours.

Nxai Pan, part of the greater Makgadikgadi/Nxai Pan National Park, sits virtually in the middle of nowhere.  A less visited Botswana destination, it is not as busy as the better known and more popular northern parks and reserves.  This is a drawcard for those wanting pure wilderness completely removed from everything and everyone. Typical species to be seen include giraffe, springbok, impala, wildebeest, gemsbok, cheetah, lion, Black-backed jackal, Bat-eared foxes and the shy and elusive Brown hyena.

Now extremely dry, barren, dusty and windy, the flat, saucer-like pan, 20 kilometres in diameter and part of the ancient super-lake that was Makgadikgadi – transforms during a good rainy season. The grasslands grow healthy and tall; rainwater fills the pans and waterholes; large herds of zebra and wildebeest, numbering in the thousands, migrate from the Chobe National Park, in search of fresh grazing and water, and to give birth to their foals – creating Africa’s second largest migration. This now wasted dustbowl miraculously metamorphosises; and zebra and wildebeest stretch from horizon to horizon, in a primeval scene that staggers.

Long before Nxai Pan became part of a national park and a tourism destination, long before black African tribes migrated here, and long before the village settlements – large and small – dotted the fringes of the pans, parts of this vast area - and much of the region - had been populated by small bands of nomadic hunter/gatherers, southern Africa’s original inhabitants, the San, more popularly known as the Bushmen.

Their knowledge of the desert environment was exhaustive; their exploitation of its resources was clever and sustainable; the harmony with Nature that characterised their way of life was exemplary.

Though today few, if any, San in Botswana are living the pure hunter-gatherer way of life, there are aspects of their culture that remain, creating opportunities for visitors to familiarise themselves with it. Interacting with the San staff working at some of Botswana’s northern lodges is a highly illuminating experience that often remains with guests long after they leave. This was certainly the case for me. 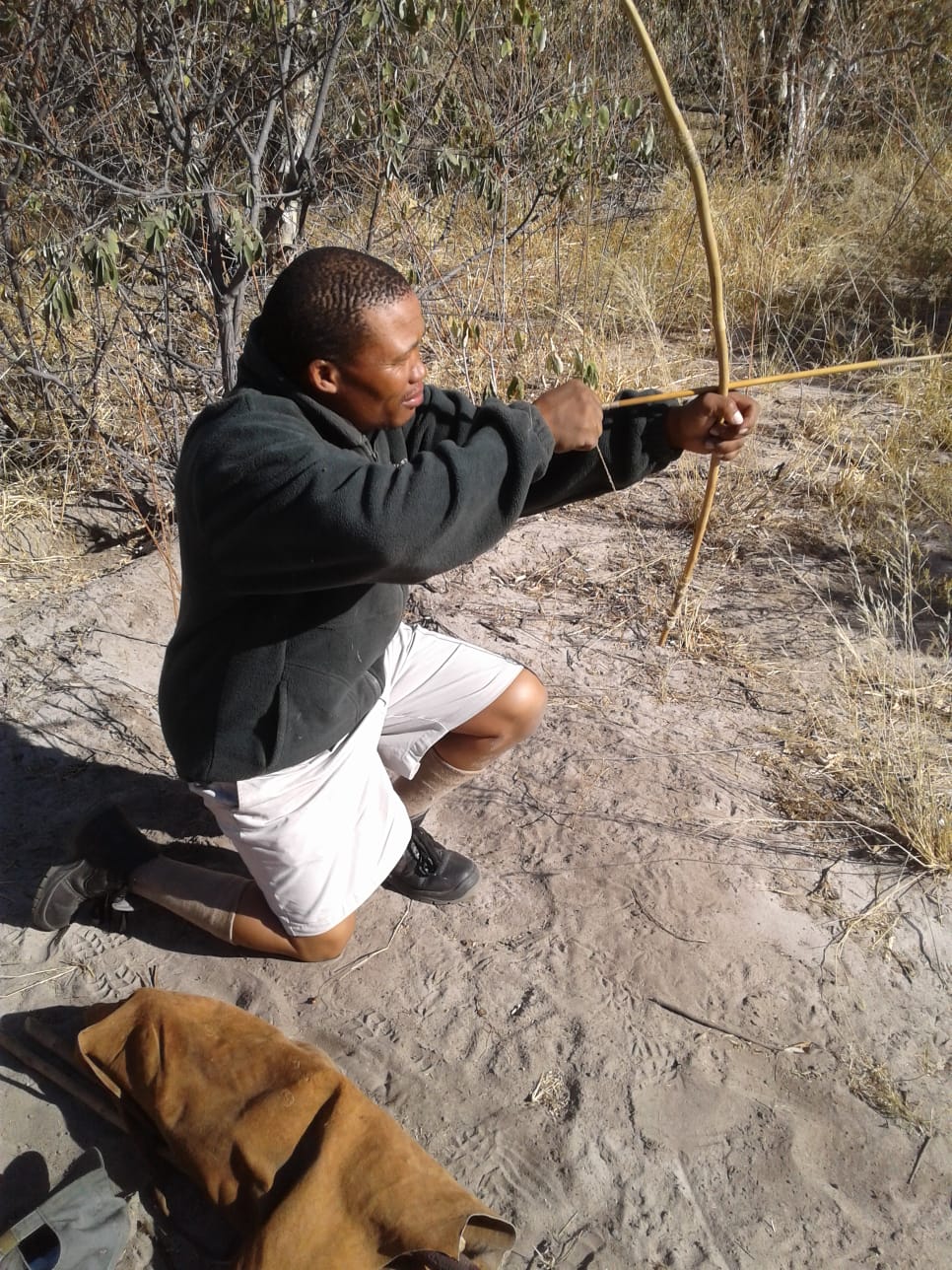 Seventy-three-year-old N!xau (not real name) works as a tracker at a camp on the pans. His life reflects the profound changes the San people of Botswana have experienced, in   - astoundingly – only one generation.

A thin, diminutive man – still sprite and fit -  he greets me with a winning smile and a marked eagerness to please. Like so many of the San people I have known over the years, his endearing disposition, warmth and open-ness immediately draw me to him, touching the heart.

In the three days I spent with N!xau, it became apparent that he takes his job seriously, acts responsibly and is appreciative of the work opportunity he has been given. It is an example of the many benefits tourism in remote areas brings to rural people.

“My job is very nice and has given me a lot,” N!xau told me. “Now I know the names of the animals, birds and plants in English. I can speak English. I have been taught how to drive. I can teach the people what I know. With the money I earn, I can feed and support my family and help my parents and the children going to school. Others in my village are not working, so I can help them.”

Through N!xau’s recounting of his life story, my time at Nxai Pan gave me a deeper and fuller insight into the San’s traditional way of life, as well as the profound changes that have come to them, demanding rapid and extreme adaptation, as they have been, and continue to be, propelled into the 21st century.

N!xau was born in 1946, when Botswana was still a British Protectorate; he was raised in a traditional San community of nomadic hunter-gatherers, where their clothing of skins and beads was still worn. He was taught by his father the skills necessary for the tribe to survive in the harsh desert environment, without at that time, support from outside.

These were skills passed down over the millennia from father to son:  tracking (“See the direction of the wind and always stay downwind or the animals will smell you.”); stalking animals on the stomach or knees (“Don’t stand up, or the animals will see you.”); trapping: making bows and arrows, as well as arrowheads from ostrich bone; accessing beetle larvae to be put on the arrowhead as a poison that will kill prey (“You have to be careful. If a fly gets on the poison and then onto your mouth, it can kill you.”); skinning the animal and cutting up the meat (“The ladies were very happy when we came back with meat; and after sunset we made a dance that would go the whole night.”); accessing natural rainwater and moisture from tsama melons and wild cucumbers; and identifying wild, edible fruits and vegetables.

My ‘bush walk’ with N!xau – during which he demonstrated the San’s remarkably simple yet effective hunting tools and techniques, trapping, fire-making methods and exploitation of the desert plants was a punctuated reminder of what came before.  A captivating foray into the distant past.

The San culture stretches back to the Middle Stone Age; and this walk in the desert sands took me far back, encompassing so many unique discoveries: how to identify underground tubers that provide a sour liquid for drinking, wild fruits and vegetables that can be eaten, traditional remedies taken from bush and tree for various illnesses, grasses used to make huts, branches from certain trees made into bow and arrow, the beetle from which poison is taken to hunt down large antelope, the steenbok skin used to make a hunting bag, the caterpillar cocoons used to make foot rattles (for the dance), and finally, the grand climax of it all, the San way of making fire with fire sticks, dung and grass, and the San trance dance.

Much has happened to N!xau’s community - and the San in general - since his youth. Many are meeting the changes and challenges of modernisation and westernisation with grace, poise, intelligence and a willingness to adapt. 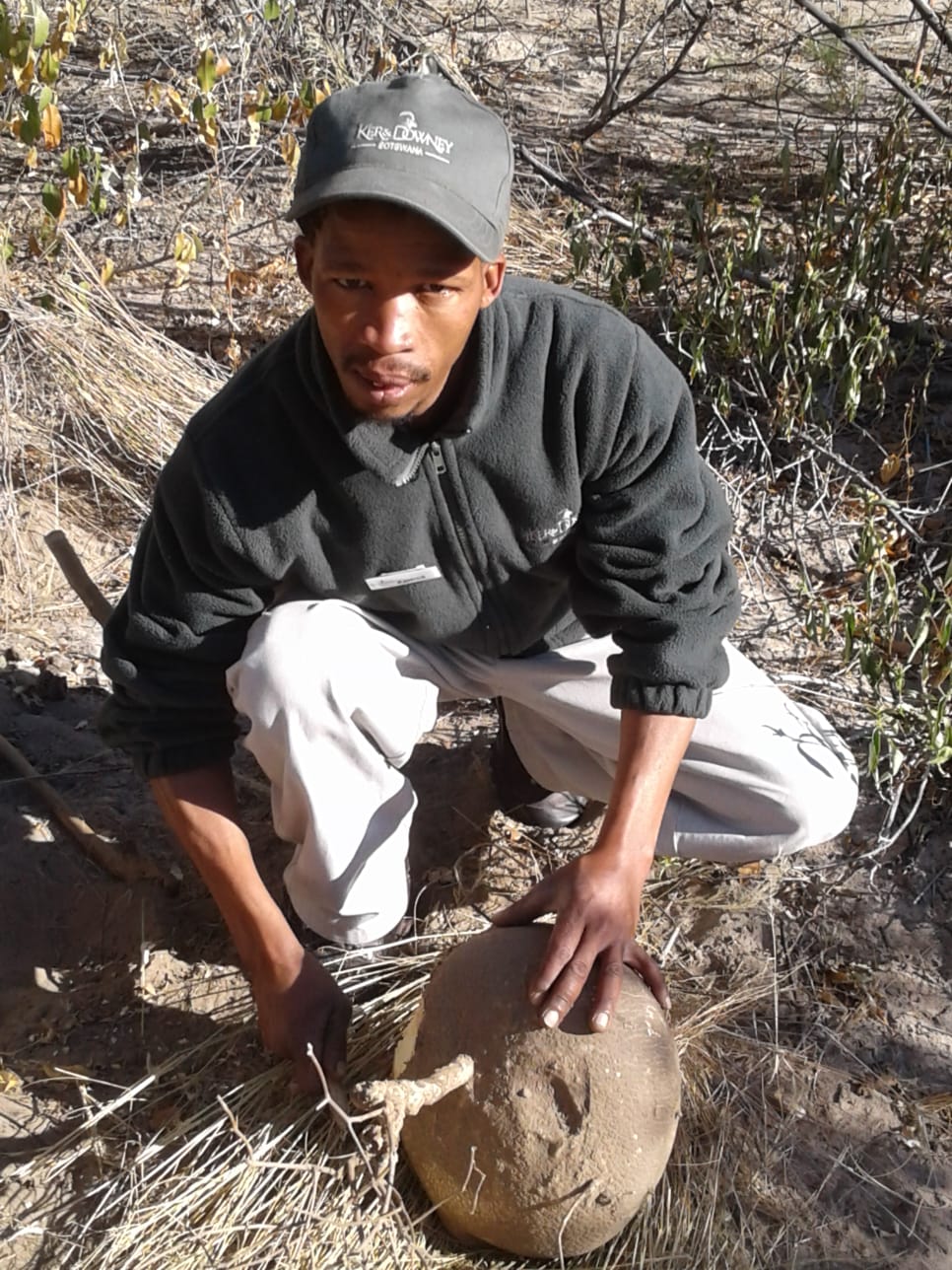 The San’s heritage is our heritage, as a reminder from whence we came, as a link to our distant roots and ancestry, demanding that we see, understand and value it.  May it never be lost.