I have had the great privilege of going on safari for the past 40 years – nearly a lifetime one could say, and still I find it far surpasses any other travel experience in its unique kind of excitement and thrill.

No two safaris are ever the same, and each holds experiences that cannot be had at any other time, or anywhere else in the world.

And it is a curious working of the mind that nearly every major animal or even landscape sighting I have had in this great African wilderness stands out like a brilliant jewel, seemingly never to be forgotten, even decades later.

Every sighting has a story all its own, and some stories harken the halls of memory more strongly.

And so it transpired with a pride of lion we were tracking one day in a vast concession of the stunning Okavango Delta.

Our guides had heard that there was a pride with about ten cubs somewhere in the concession, but had no idea where they were. Would we like to go tracking them?

Would we? What a question!

Eight hours later, as the sun, heat, dust and fatigue of negotiating the twists, turns, corrugations, rocks, bumps and potholes of the bush roads started to tire – and frustrate - us, we began to wonder if we had jumped to the call of adventure too soon.

Our guides were expert trackers, stopping every few minutes to read the lion spoor, which told them when the animals had passed, how many there were, their approximate ages, which were male and which were female, in which direction they were moving, and their general physical condition.

But still, after nearly a full day of tracking, the animals’ whereabouts eluded us.

“Do you want to go back to camp?” they asked us. 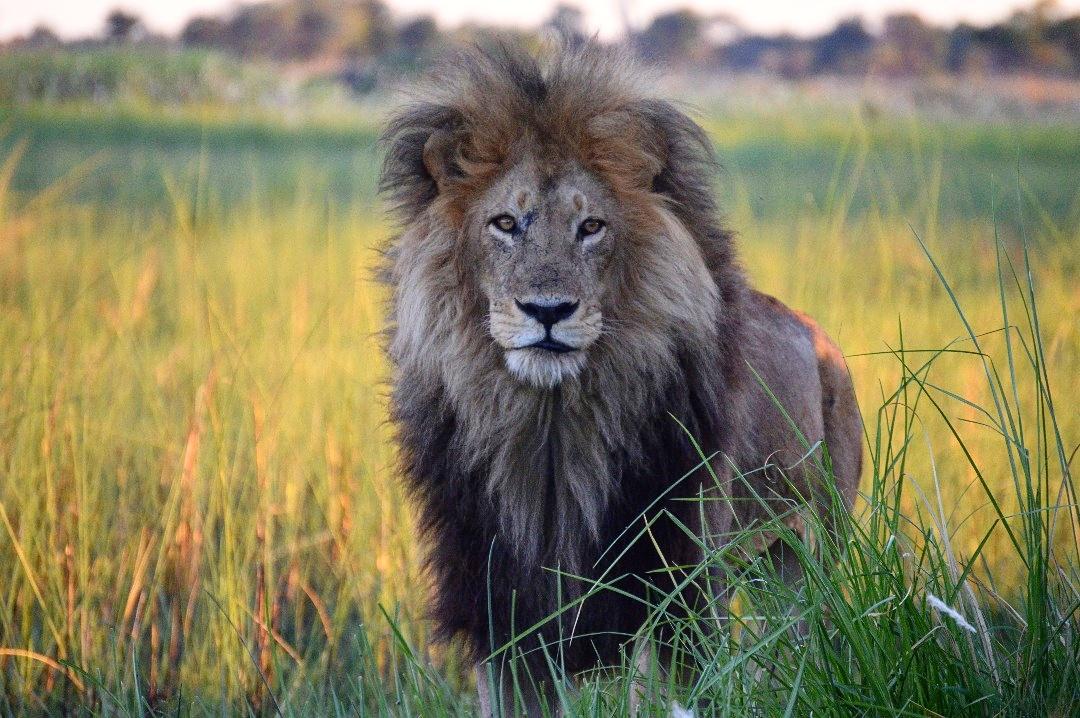 A cool shower, iced drinks and a nap on a comfy bed called out in alluring temptation, and I was just about to give the signal to turn back, when, suddenly, out of nowhere, a young male elephant emerged from the thick bush, trunk fully erect in the air, and went bounding across the road in front of us.

“They’re around,” concluded the two guides in unison.

We took off like a bat out of hell, our heads nearly hitting the tarpaulin roof as the driver negotiated the bumpers with speed and agility, jostling us right to left with such force that once or twice we fell off our seats.

Oh, but the pay-off was spectacular!

Skirting some thick bushes, we came across a clearing where three lionesses rested in the shade of a tree, one absolutely covered with their offspring.

Ten baby cubs - adorable beyond words – cried with that distinctive feline voice, whilst constantly in motion. They were hungry, and so were their forebearing mothers, who could do nothing to keep the littles ones at bay, but remained infinitely patient at their antics.

The babies wanted to suckle, but the clearly famished mothers had no milk, and it was apparent that they would have to hunt soon to produce the life-giving sustenance. 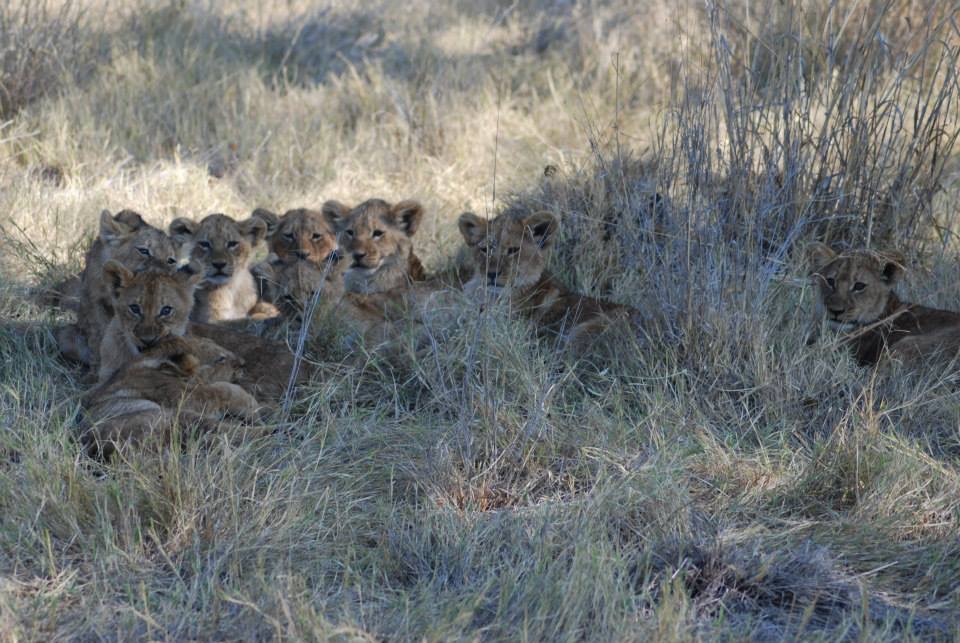 The cute-as-buttons cubs - all around and atop one of the three females - never stopped moving - climbing the lioness’ back, biting at her ears or tail, mock attacking each other and tumbling down her back into the sand, and trying by all means to get at her teats.

The expression on all three lionesses’ faces was one of total exasperation, that maternal feeling of understanding one’s offspring’s suffering and desperately wanting to help, but being completely powerless to do so.

Moreover, their vexation was exacerbated by the inability to discipline the brood, as they continued to climb the lionesses, pull at their tails and ears and whine for their supper. It was all written on their faces, as any mother would recognise.

In a flash, the mood shifted, and the lioness with most of the cubs on her back lost her patience, growling and snapping her gigantic teeth in the air. She then partially stood up, so that the cubs rolled down her body and onto the ground, with a couple of persistent ones still hanging onto her teats, and others immediately going into ‘play-fight’ mode in the sand.

The formidable beast growled again, eyeing the bushes in the distance for even a suggestion of some prey nearby, then lay down again, only to have the ten cubs quickly retrieve their places at her teats, insistently trying to suckle, until the irritated female pushed them away. 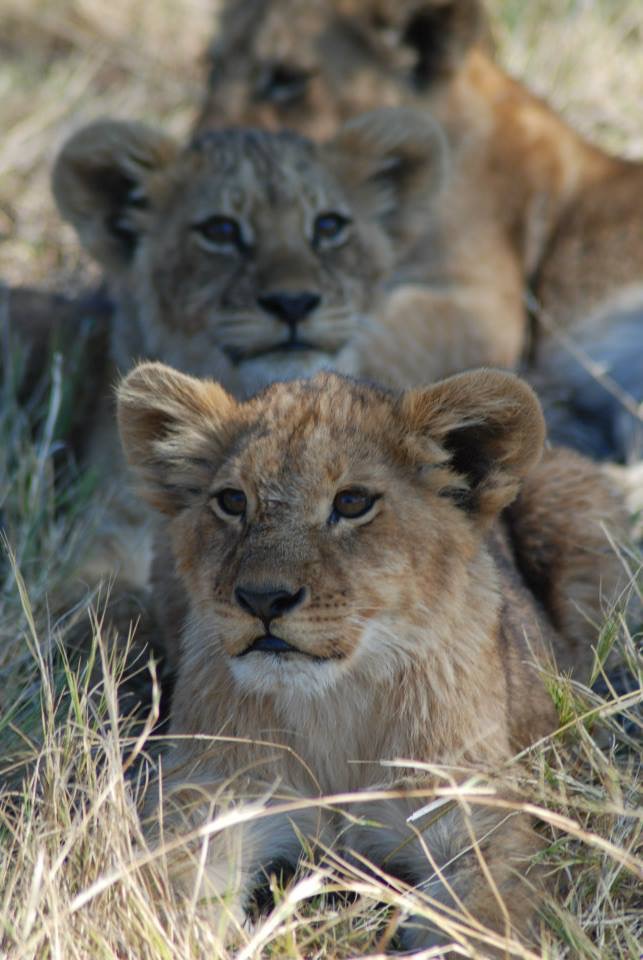 This drama repeated itself several times, with the entire pride becoming increasingly hungry and frustrated, to the point that we could acutely feel their pain.

I caught a glimpse of one brave little soul who slowly and craftily crawled from the lioness’ haunches up her back, across her back and to her head, where she began to gently and almost tenderly lick the lioness’ ears.

The mother closed her eyes in pleasure, obviously comforted by this act, to which the clever cub then slowly, almost imperceptibly. slid down her shoulder to land directly in front of a teat!

Enough! I could hear the mothers silently cry out, as the three got up together, then began to move into the thick underbrush, to begin, it appeared, a search for prey, and the hunt.

They would have to leave their brood to fend for themselves in the fast approaching dusk, with predators and danger lurking. The once playful and demanding cubs now stood quiet and still, simultaneously turning their heads to watch their mothers depart, a look of confusion and worry quickly gathering across their faces.