The schoolchildren were busy. Standing at the entrance to the massive, ornately decorated wiharn of Wat Chedi Luang, one of Chiang Mai’s most important temples, they cheerfully coaxed devotees to rent a plastic bag - to keep their shoes dry. Shoes had to be shed when entering a sacred or historical building, residences, and sometimes even small shops.

‘Five baht only!’ came the gentle and not-at-all pushy sales pitch. This was a bargain, and a cleverly conceived service, as it was pouring rain and shoes left outside the prayer hall would definitely get soaking wet.

Girls dressed in traditional blue ankle-length, wrap-around tube skirts and boys in blue shorts and northern style traditional shirts, they exuded the infectious exuberance of youth. The boys – ever mischievous – tapped the girls on the shoulder or back with makeshift fans; the girls moved around the contained area - snacking, chatting, giggling, laughing and feigning rebukes towards the boys for their naughtiness, though secretly enjoying the attention. The fresh and youthful energy, full of carefreeness and playfulness, brought a shimmer of glee and a smile to the face. 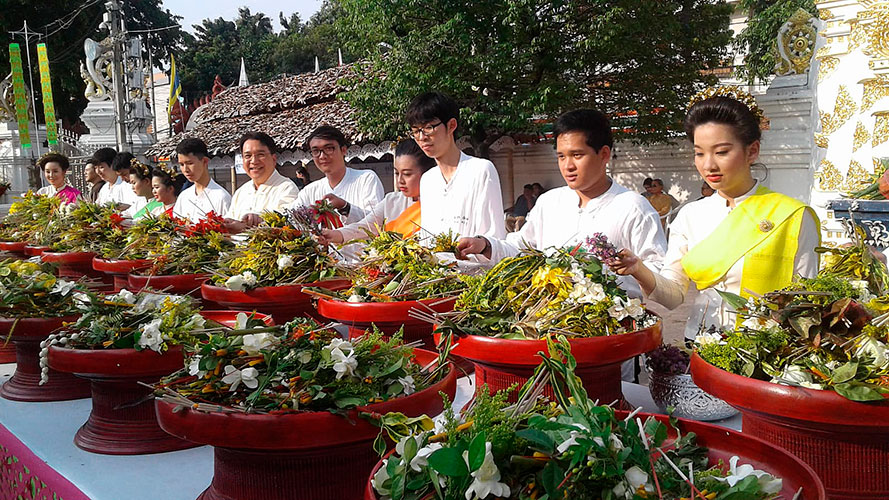 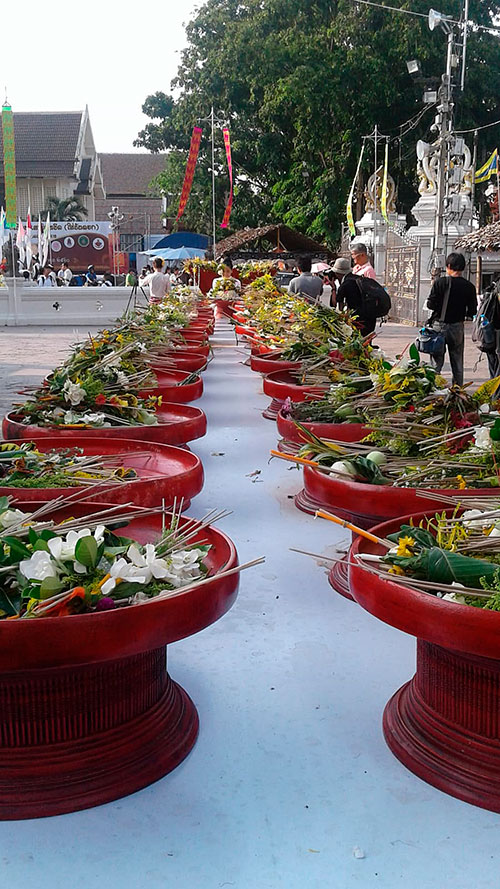 Around these happy vendors was a swirl of noise and activity. As monks chanted non-stop, the repetitious, near hypnotic sounds sending ear-splitting eruptions over the loud-speakers, devotees carrying baskets or satchels full of flowers, leaves, candles and incense, first wai-ed then carefully laid a tied parcel of each in trays or funnel-shaped baskets that lined long tables or stood before the sacred images of Lord Buddha, the city’s founder King Mengrai or mythological deities.

Huge piles of flowers could be seen everywhere, before chedis (pagodas), temple buildings, statues, gates, and every nook and cranny that met the eye.

This was the festival of Inthakin, which marked the foundation of the city’s pillar by King Mengrai in 1296AD.  It was one of the few times in the year when the vestibule housing the city pillar was opened and could be viewed from afar by anyone, albeit only men could enter the vestibule – laying offerings and saying prayers, and women were refused entry, the belief deriving from Hindu practice that because women menstruated they would somehow foul or contaminate the sacred premises.

The monks’ chants, in the ancient language of Pali - spoken during the Buddha’s time approximately 2,500 years ago - blasted out blessings for the city and entreaties for rain, as the end of the hot, dry season approached.

In one corner of the temple courtyard attendants prepared a flower- bedecked stage upon which cultural performances would take place that evening, whilst the mothers of adorable little girls smoothed their colourful clothing, fussed with their flower-adorned hair, and applied yet another layer of caked make-up to their tiny, China-doll faces.

It was impossible to gauge the scope of the festival, as it stretched for a week, with each day bringing thousands of local devotees crowding the temple grounds, baskets of flowers and offerings in hand, as they went to each and every revered edifice, and laid offerings before them.

The festival of Inthakin – meaning City Pillar – is believed to bring security and well-being, as well as to create moral support, for the people of Chiang Mai. During a mid-day procession, the Inthakin spell is recited; and this, along with a Buddha image brought from the neighbouring Chang Tam Temple, propitiates rain. Indeed it often does happen that the first rain – or one of the first rains – of the season falls during the festival, generally held during the month of May. 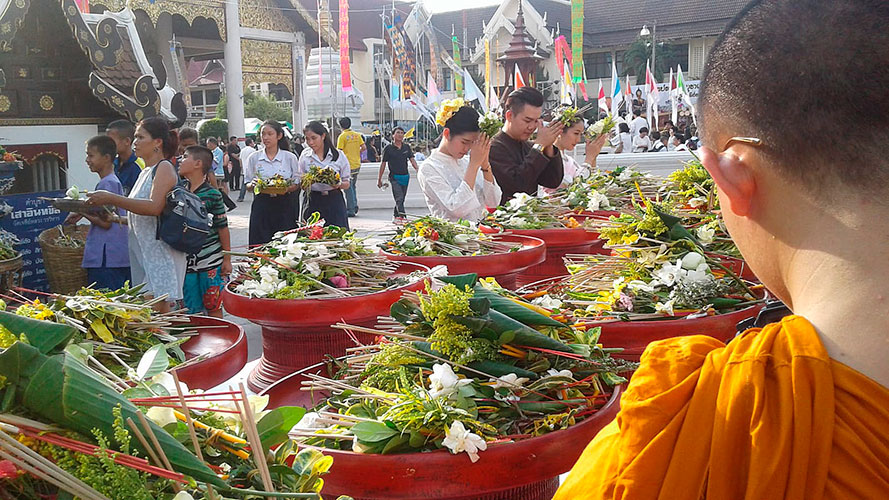 Like all festivals in this city full of festivals that mark all kinds of occasions, they must be made to look beautiful; and the over-arching importance of flowers to the Thai people was underlined in this most ascetic and spiritual of observances.

What made the observance of ritual and ceremony so important to northern Thais in a world where they have largely been lost? What made people from all walks of life – educated and uneducated, city-dwellers and villagers, professors and labourers, men and women, young and old – come in such numbers to pay respects to the pillar upon which their city was founded over 700 years ago?

The retention of these cultural practices, and the depth and strength of cultural pride carry lessons for all.

‘Number 19!’ shouted out one of the fidgety, gangly boys, to which two or three girls went scurrying to search for the customer’s shoes.  The division of labour went along gender lines. Boys called out the numbers, in between pushing, poking, punching, kicking and teasing one another. Girls received the shoes, put them in plastic bags and cubby holes, then, when a number was called, retrieved them and delivered them to the customers. In short, the girls did most of the work whilst the boys mostly fooled around.

What was immediately noticeable – and striking - was these children’s happiness. Performing this simple task, with such abandon and enthusiasm, seemed to make them feel useful, and brought them joy.

A smiling, middle-aged man, seated nearby, greeted me. He had a kind and gentle demeanour, as so many northern Thais do.  He introduced himself as the children’s teacher, from a municipal school down the road.

‘What will the children do with the money they earn tonight?’ I asked.

‘We want to build a religious shrine on the school grounds. The students had discussed several plans and came up with this idea of keeping shoes dry during this festival,’ he explained.

I turned to watch the laughing, scurrying adolescents – ever in motion - as the entrance to the viharn filled to capacity.

‘The students seem so very happy in what they are doing. You must enjoy teaching them,’ I commented.

The teacher smiled sagaciously, then hesitated before speaking.

He then paused and added, with a low laugh: ‘Teacher happy, students happy.’

A longer pause, some reflection, then came the final observation.

Posted in SIMPLE BUT POWERFUL.