Fifteen-going-on-sixteen Kate Hanover stared at the small hand mirror in her purse.  She winced at the sight of her face, full of puss-filled, soon-to-burst pimples, pock marks and deep crevices in her soft skin.

Depressed by what she saw – and by her life in general – she slipped further into self-absorption, oblivious to, or perhaps intentionally, ignoring her mother next to her, who was concentrating on the narrow, potholed streets of Chiang Mai’s Old City.

“If we don’t hurry, you’ll be late for your ballet class,” the slightly harrowed, middle-aged woman said.

Kate did not respond, stewing in her faraway world of self-pity and dissatisfaction. The hormones raging within had turned this once sweet, agreeable, very happy girl into an impenetrable wall of resentment.

‘What now?’ Mrs. Hanover said to herself in total frustration. ‘Whatever could be wrong now?’

To Kate she expertly hid her irritation, or so she thought, and said nothing, as she pulled into the school’s parking lot. She was remembering her own teen-age years and the inexplicable feelings that came in powerful waves, the un-named, inscrutable grievances totally out of the realm of reasonableness. 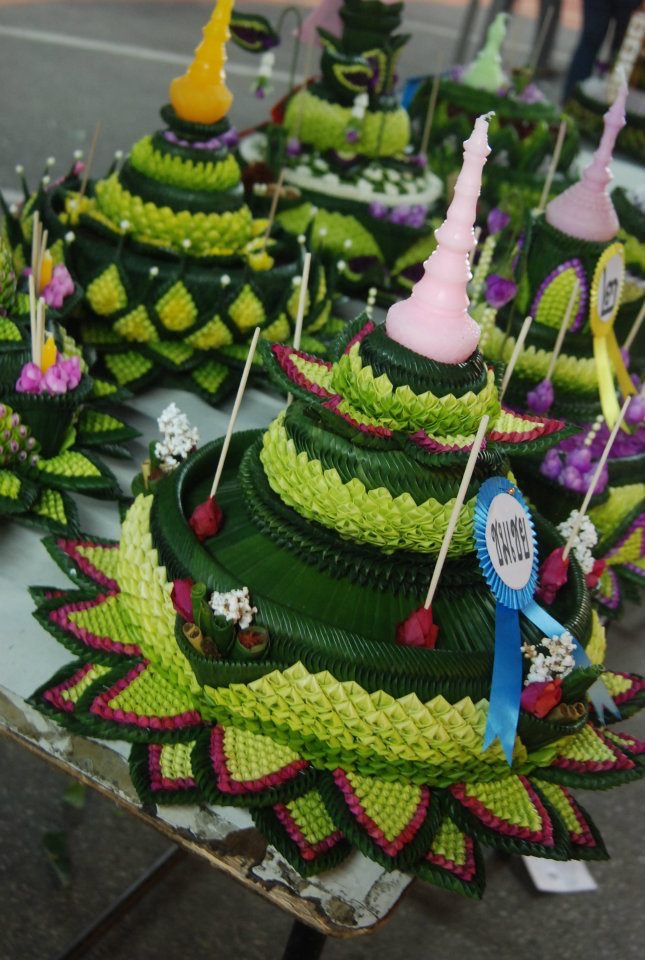 One hour later, Kate emerged from her class - all smiles and giggles, her friends and the buoyant power of the dance having almost instantaneously reversed her mood.

“How was the class?” came Mrs. Hanover’s usual question as her daughter got into the car.

“It was fun,” came the usual response.

Mrs. Hanover turned onto the super highway and headed for home.

“We have a special day coming up soon,” she reminded Kate. “My darling girl will turn 16 in just two weeks’ time. Plus we have the Loy Krathong festival, just two days after your birthday.”

She sensed Kate shifting back into the quiet moodiness of just a few hours ago. “As you know, we follow the Buddhist practice of making a donation, giving to others, on your birthday. Where would you like to make your donation this year?”

“I don’t know yet,” Kate replied tersely, a slight irritation in her tone.

“Well, OK, we still have some time,” said Mrs. Hanover. 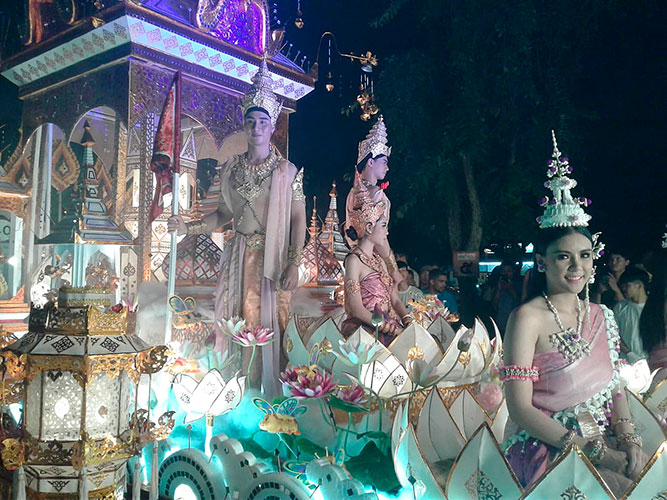 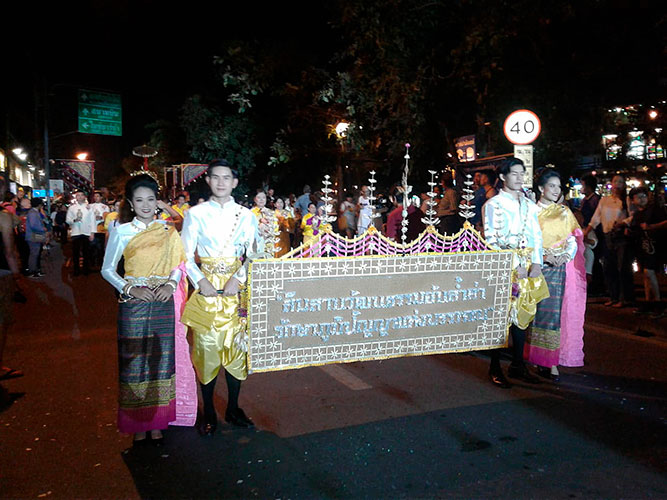 The weeks passed quickly, and soon Kate and her mother were at Chiang Mai’s Mae Ping River, pretty krathongs in hands, ready to release them onto the river’s water and watch them float away.

An animist practice that pre-dates Buddhism,  the Loy Krathong festival invokes devotees to give thanks to the river goddess for having given them life-sustaining water whilst at the same time asking her forgiveness for having polluted it.

Thousands of people – Thai and foreign tourists – had gathered at the river’s edge, krathongs in hand, ready to float the banana leaf cup - - festooned with flowers and glowing candles -- on the wide, full Mae Ping River. They held the krathongs to their foreheads and uttered a prayer, before gently releasing them into the water.

It was an evocative scene, the Narawat Bridge beautifully lit up, countless krathongs, illuminated by a small candle, being swept downstream by the river’s gentle current, fireworks going off in the distance, and the pretty khon loi (large, kerosene fueled lanterns) swaying in the breeze as they slowly ascended the sky towards the ivory coloured full moon.

Kate stood by the river’s edge, held the krathong to her forehead and made a fervent wish that somehow the powers that be would descend upon her and remove the ugly markings on her face and turn her into a beautiful maiden, ready to be swept away by a faceless Prince Charming.

Mrs. Hanover let her krathong float, falling into the light and gay mood of the festivities; this brought an instantaneous smile to her face and laughter in her heart.

But not so for the brooding Kate, whose moodiness had taken hold of her once again.  She was back in her world of dissatisfaction and resentment, the cause un-named and unrecognised. Wishing to escape the negativity, an exasperated Mrs. Hanover moved towards the bleachers, climbed up and installed herself there, in anticipation of the cultural performances to follow.

Quite suddenly, out of the corner of her eye, she caught the woeful sight of a young man dressed in rags, his dirty, brittle, disheveled black hair standing on edge, his rough, ruddy, soil-stained face fixed in a gaze of dejection and depression. His thin legs protruded from a sort of worker’s overcoat, and they told the story of the rest of his underfed and undernourished body. He seemed oblivious to all that was going on around him and had a faraway look that defied interaction with other human beings. A cloud of aloneless – and loneliness -enveloped him. He partially hid himself under the bleachers, muttering to himself in soundless words, and toying with his rumpled, filthy overcoat with his puffy hands.

Kate caught sight of the young man, and came to sit next to Mrs. Hanover, showing perhaps her solidarity with her mother, in their concern and compassion for this poor outcast.

The pitiful figure moved out of the shadows of the bleachers and started to walk down the crowded street. Occasionally bumping into festival-goers, he would quickly back off, his energy saying ‘Don’t come near me. Don’t touch me. Don’t speak to me.’ Then he would put one hand in his mouth, and with the other slap the side of his head, as if to punish himself for the accidental contact.

A dark curtain of sorrow fell over Mrs. Hanover, and she struggled to refrain from crying. Indeed the feelings were so strong that there was an almost uncontrollable urge to sob, really sob, at the sight of this human being in such despair. Where did he come from? Where was his family? Did he live on the streets? How did he find food? The questions, and emotions, were overwhelming.

She turned to look at her daughter standing next to her. She saw tears welling up in her eyes, and a look of total care and compassion on her face.

“Mom, this is where I want to make my birthday donation,” Kate said softly, siding up closer to her mother.

The teen-ager, soon to gain the wisdom of adulthood, took B500 from her wallet and walked towards the young man. Standing before him, she searched for some recognition of her presence, trying to engage him with her eyes. But he looked past her, totally immersed in his own strange world.

Kate took his hand and placed the B500 note in it. He pulled back at first, startled at the touch, then looked down at the money. She closed her hand over his, confirming the contact and smiling at him.

“This is a gift for you,” she said in her broken Thai.

He looked down at the B500, his face frozen in an expression of complete disbelief. Removing her hand from his, Kate smiled again and turned to go.

A wellspring of emotion overwhelmed Mrs. Hanover at the sight of her child’s compassion. Tears streamed down her face, as she heard her daughter say, “Mom, he is suffering so. How blessed I am to have the life I lead!”

Posted in SIMPLE BUT POWERFUL.